I see a lot of talk right now and concern about increases in the activity of the more dangerous beings, the night mares, the boggles, the goblins, the nameless terrors, the battlefield fey. The Unseelie, to be blunt. Out and about and causing human misery, or amplifying it, as they do. Because, all urban fantasy plotlines aside, that is what they do; its their nature.

So let's talk about that. 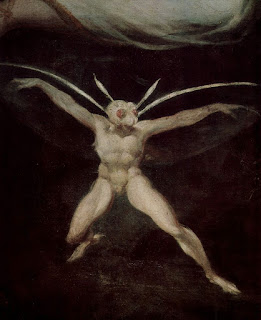 On the one hand the human world is consumed by a pandemic right now, a truly global plague, and there is political unrest and chaos in some places. Communities are torn by uncertainty, fear, and violence. It is inevitable that these circumstances will cause or increase human stress and trauma and that those things will in turn potentially cause psychological effects. Nightmares, anxiety attacks, depression - all perfectly normal when your community is under such stress.

On the other hand this, my dear readers, is the bread and butter of the malicious fairies who create, amplify, and feed on such things. The purely rational psychological explanations can be argued but for the spiritually or folklore inclined there is also the other layer, the dangerous fairy beings who are drawn to these energies and these times like moths to a bright light. It doesn't have to be one or the other it can most definitely be both and it is worth considering the unseelie side of this coin. This increase in activity is happening and is being observed in many places, whether an individual likes the idea or not.

Contrary to the more 'white light' line of thought making friends with these beings or trying to empathize with their situation will not help you. These are not beings who just need a hug and a cookie to sooth them into standing down. No. You can't feed a cat a vegan diet and expect it to survive and you can't 'friendship' a night mare into feeding off of anything except terror. All things are true to their own nature and the nature of these beings is to feed on and encourage human suffering and pain - and death. In this situation you need to understand what and who you are dealing with and why they are the way they are. And accept that some beings in wider reality are hostile to humans by nature or adapted to feeding on painful emotions or death.

The malicious beings have always existed, and exist across the world in many forms, and some are indeed antithetical to human health by nature. They are always around, of course, and are not limited to these particularly interesting times but like sharks responding to chum in the water they appear more frequently and in greater numbers when there is more for them to feed on. We may also suggest that there is a pattern of these malicious beings showing up a few years before events start to shift, perhaps anticipating the coming trauma or perhaps perceiving slight energy shifts that humans are blind to. Perhaps even helping the changes along.

So then what to do? You can't make friends with them, and you can't make them go away by ignoring them. We might encourage apathy but then again we aren't on your side, are we? We do strongly encourage bribery and paying off these beings to leave you in peace, but that is a commitment that can't be turned away from once you agree to it. Outside that your options ultimately are simple: defend yourself or fight back. If you want to defend yourself then look into traditional protections against fairies and dangerous spirits - just be aware that different kinds of beings require different defenses. Know your enemy. If you want to fight back you need to know what traditionally has worked to drive out or banish these beings, and again that varies. It also means a fight which will not be easily won, especially now.

In these interesting times the dangerous beings are more numerous and more free ranging. Before you have a problem it may be best to start beefing up your wards and protections - cleanse regularly, shield yourself, ward your space, and make sure you don't get lazy with any of it. This is one problem that's much easier to deal with by preventing it than by removing it.